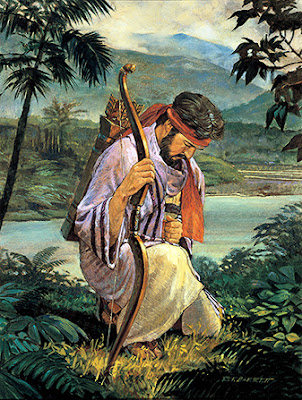 I was going over 1 Neiph 16 again today and some thoughts came to mind.

"And thus my father had fulfilled all the commandments of the Lord which had been given unto him."

How many of us could say that? My heart was filled with longing to be that person. It reminded me of Daniel of the Old Testament. When the three satraps were looking for a way to accuse him before the king, they could find nothing. Nothing. The verse states he had no negligence or neglect in any of his duties. Can you imagine that? Maybe I should stop typing and mop these floors I've not washed this week? But I digress. Back to Lehi....

Just a few verses later, things got tough again. They were out of food. I don't know if you've ever been in that situation, but I have. When the pantry and refrigerator are empty and there is ZERO money in your account to purchase food it is discouraging. We say we are willing to suffer all things for the Lord, yet sometimes when things are hard, we complain. That's what Lehi did. This great man who followed every command of the Lord murmured against the Lord because of their lack of food.

This reminded me of two things:

Oh Nephi. I love this young man so much. He suffered more than the rest of his family because not only did he face the exact same difficulties as they did, but he also suffered from their constant complaints and negativity. Every once in a while they'd try to destroy him too, blaming him for their challenges.

It is so hard being the sole person striving to honor the Lord in your tribe of people. Often he had his father's strength and faith to lean on, but in this passage, even his father had taken a different path. This is a great reminder that sometimes you have to go it alone. You won't have that Samwise Gamgee to tell you, "This is hard, but we'll do it together."

Nephi is also a great example of one of my favorite mottos, "Do the next thing." His bow broke. They were starving. Everyone was laying around complaining about the hardness of what the Lord was requiring after them. I'm sure Nephi was heartsick about the brass bow breaking. It was a great resource for them. But, does he say, "Really God? Now you want me to find food without the one thing I had going for me?" No! Nephi puts on his big boy sandals and gets a stick and makes a bow. Was it as good as the resource he had before? Not even close. But, it is what he had.

Sometimes we lose the only resources we have. When that happens, we look around and say, "Okay. What can I do now?" He fashioned the best bow he could and then inquired of the Lord. He even went to his father and asked him to inquire of the Lord of where he should go to find food. That simple act helped to bring his father to repentance.

Nephi teaches me, "Yes, you are tired, hungry, and discouraged, but get up do what you can and leave the rest to the Lord."

The Daughters of Ishmael:

I'm guessing they were used to a much cushier life. Then the Lord asks them to marry these men who are taking them from the comforts they are used to and causing them to wander in the wilderness. And just when things seem to be at its worst, their father dies. It's natural they were upset.

But, here is what they didn't know. Their beloved Jerusalem was about to be destroyed by the Babylonians. At best, they'd have been carried away to Babylon to serve their captors. At worst, they'd be either dead or left as "the poorest of the land" to work the fields and live amongst the rubble left there. They were being rescued from that.

There was something else they didn't know. Yes, what they're doing is hard. What they have to experience is painful. But, they were being led to a different land. A land better than the one they'd left. They'd get to start a kingdom of people. The mothers of a new nation.

In the midst of our journeys, when trials are swirling all around us, we rarely see what we're being rescued from and the bounty that lay before us when the journey is over.

When I am facing difficult things, as I am now, I want to remember I don't see the whole picture. I want to be the one who increases the faith of those around me, as Nephi did, and not the one who gives up and joins the pity party.

The Lord has called me to do hard things and I want to honor that.

Posted by Annmarie Worthington at 10:39 AM

How I Became a Latter-Day Saint

Annmarie Worthington
I am a single mom of four children, whom I homeschool. I work several jobs to make ends meet, my favorite of which is writing. I love literature, history, classical music, math, and in general just learning.